Tweetdeck is the dashboard management app or the most powerful social media management tool which is generally used by journalists or other content creators for monitoring news trends and managing content from multiple accounts.

This social media management tool is also used for organizing, engagement and real-time tracking. It is a totally free web-based tool that helps its users to manage and post to their Twitter accounts. Apart from this, TweetDeck improves organization and functionality across Twitter accounts. 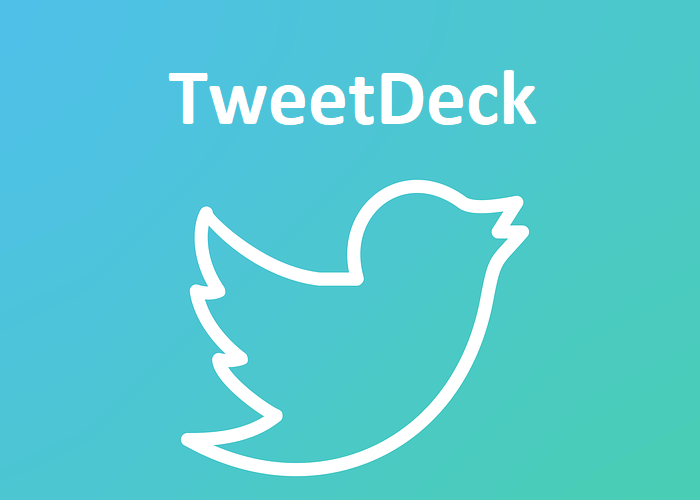 TweetDeck – all you need to know

With the help of TweetDeck, Twitter experiences can also be personalized by users.

Besides this,  it also allows customizing multiple columns for those users who are highly active and those who analyze or consume a lot of information.

From your, Twitter accounts separate columns of activity can also be displayed by TweetDeck’s dashboard. For example, Separate columns can be seen for home feed,  notifications, direct messages and activity on a single screen.

These columns can also be reordered, deleted and added new ones from other Twitter accounts or for specific things like hashtags, trending topics, scheduled tweets, and many more.

The best thing about TweetDeck is that it works very fastly. On TweetDeck, Users do not need to refresh the page, like the new tweets on their timeline or their notification page because it appears automatically.

By using TweetDeck users can schedule their Tweets in advance and with the help of the TweetDeck search history feature, users can also use the Twitter advanced search, re-run the searches which have been searched before.

Multiple profiles on Facebook, Twitter, and many such platforms can be controlled with the help of TweetDeck.  Apart from this, TweetDeck also helps a business to broadcast the brand and message large masses too with very little effort, but broadcasting is just 50% of marketing the social media equation.

The other 50% respond to customers and also shares what the customer tweets.

We all know that Retweeting is the best method where customer relationships can be built by businesses.

With the help of TweetDeck, Users can retweet with a simple and effective manner, but the method is slightly different that is depending on how they use it. TweetDeck is used in various forms, some use the desktop application on the computer, some use Web browsers and some use it on their smartphones as an application.

In the second step, you have to keep your mouse over the user avatar adjacent to the tweet without selecting anything. It would replace the avatar with four small buttons, a right-facing “Retweet” arrow being the lower left.

All you need to do in the third step is just press the arrow “Retweet.” Click “Retweet Now” to immediately send the tweet. If you want to make any changes to the retweet, click “Edit Then Retweet.” Edit it and click “Send.”

In the second step, all you need to do is that just turn the mouse over your tweet and click the appearing “Retweet” button. The button will not be labeled but it can be easily identified by the two arrows. One would be facing upward while the other would be facing downward.

What you need to do in the last step is just press the arrow “Retweet.” Click “Retweet Now” to immediately send the message. If you want  to make any changes to the retweet, click “Edit Then Retweet.” Edit it and click “Send.”

Follow these steps to use TweetDeck mobile application on your smartphone.

If you want to use the TweetDeck application on your smartphone, locate the tweet that you wish to retweet.

In the second step what you need to do is Just Tap on the tweet. A different screen inside the TweetDeck app will be shown.

In the third step what you need to do is Tap “Retweet.” If you want, you can edit the tweet and then tap on the “Send” button. Tap “Retweet Classic” and change it to “Retweet New” at the top of the screen if the retweet consists of more than 140 characters or you want to use Twitter’s default retweet layout, instead tap “Send.”0

For Example- if you are managing three Twitter accounts then you can line up all of their notification columns together in TweetDeck so you can always stay on top of interactions.

Similarly, if you wish to follow a specific trending topic, you can also add a column for that trending topic keyword or phrase to show you all the tweets happening in real-time.

How to start using TweetDeck

By using Tweetdeck, users can Customize their experience with Tweet scheduling, filtering, collections, search, and more. Here are some of the best  features of TweetDeck:

TweetDeck has been designed in such a way, that it provides its users unlimited column. Users can add several columns as their wish.

The most powerful social media management tool Tweetdeck helps its users in the Reordering column. The columns of icons are listed on the left navigation bar which includes Home, Activity, Notifications, and mentions, represent your TweetDeck column order. Users can change the order by clicking an icon and dragging it to their desired place.

Tweets can also be organized With collections, According to topics, events, interests, conversations, and more, all in real-time. If you also wish to organize Tweets, then add your collections as columns, and Tweet the URL to share it with others.

Users can also Take advantage of their keyboard to use TweetDeck even faster. Here is the list of some amazing TweetDeck keyboard shortcuts which would help you to use the app.

A: That means Add a column

By using these shortcuts, You have also an option to navigate Tweets

1-9: That means Navigate through columns 1 to 9

0: That means go to the last column on the right

Up arrow key: That means Move selection up

Down arrow key: That means Move selection down

Backspace/ Delete: That means go back to the main column

R: That means Directly reply to Tweet from a column

T: That means Directly retweet a Tweet from a column

TweetDeck offers amazing global filters feature, User can use this Global filters for filtering out certain text content, authors, or sources to Get rid of unwanted updates in their columns.

it can add #facebook as a filter for preventing tweets with that hashtag in it from showing up in users stream.

Users also have an option to Schedule posting on TweetDeck when they don’t have time to be on TweetDeck all day. Create a dedicated column for the tweets that you wish to be scheduled.

An app is also offered by TweetDeck for those people who use Google Chrome as their preferred internet browser which is only available in the Chrome Web Store.

Once you start typing characters into the search box, TweetDeck will perform a real-time search that attempts to autocomplete your search term, surfacing search topics and accounts that may be important.

In the top half of the drop-down menu, Different search topics will be displayed while user accounts will be shown in the bottom half.

When you select one of the search terms that is suggested then you will have an option to browse users related to that search topic or search term-related tweets.

Column filters TweetDeck’s column filters are a powerful way to quickly update columns to configure searches by keyword, date and time, and stay on top of new Tweets.

Notifications: Notifications for a specific account, including when tweets are on the site. Is Retweeted, liked, or mentioned, and if the account is followed by someone.

Lists: Create a list you are already following and link it.

Activity: What happens to the accounts that you follow

Likes: Tweets marked as likes from a  particular account.

Messages (all accounts): Direct messages in aggregate from all of your authorized accounts.

Trending: Different patterns throughout the world.

On July 4, 2008, The first version of TweetDeck was released by Iain Dodsworth. Initially, TweetDeck was an independent Twitter app.

it was discovered that  TweetDeck would be leading to a self-replicating tweet that affected over 83,000 Twitter users. On April 15, 2016, the Windows App was ceased functioning.

How to change Username in Spotify

Editorial Team - December 31, 2019
0
If you ever needed to fill out or edit a PDF file, you have probably searched Google for a PDF editor that could help...