Home Technology What are the Benefits of having a Satellite Internet?

Today, the majority of us now get internet services through phone lines or fiber optic cables, however, households are rapidly switching to satellite internet connection now.

Satellite internet provides multiple benefits if we compare them with any other broadband internet that must not be overlooked. 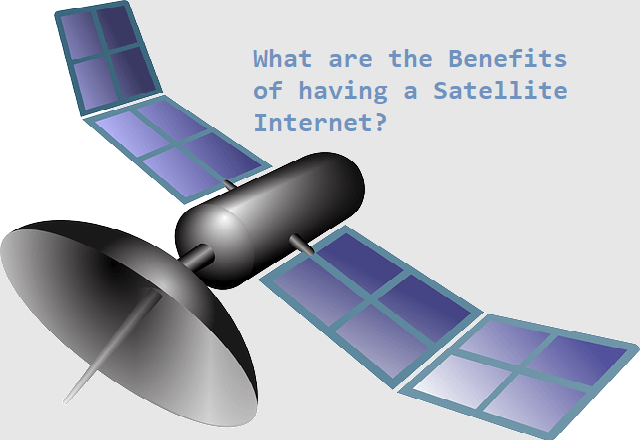 What are the Benefits of having Satellite Internet?

Select the satellite Internet as the medium of internet connectivity when you have ensured that it is going to be the right solution for your connectivity requirements.

Inability to Internet access and low connectivity is something not very amusing for anyone, no matter where they are located in the world.

This is an irrefutable fact for any internet user. There are a couple of places in the world that still do not have terrestrial Internet access or if they have access to the quality of available reception is inconsistent.

This is the most evident benefit of using a satellite internet connection which provides coverage at any location in the world. One single satellite in the geostationary orbit can cover a distance as far as the oceans or the continents.

This far-ranging coverage makes high-speed Internet access from remote locations fast and convenient. It is very much possible to connect multiple remote locations ranging across long distances via a secure and private link.

Due to the curvy nature of our planet Earth, rough landscape, oceans, and various natural and artificial obstacles created by people, it is difficult to plan a direct communication path over long lengths. For companies that work in international oil exploration,

it is almost unimaginable to directly interact with the headquarters that are located thousands of miles away. For meeting any such requirements, a satellite internet connection is the most efficient option. For establishing the satellite connectivity, one may only require a power supply and a clear-cut view of the satellite projecting at 23,000 miles away in the orbit.

The first and foremost thing that anyone observes regarding satellite is its internet speed. The majority of the satellite providers deliver multi-megabit Internet speed which sometimes could be faster than any other nearest option that we have. However, if the possible options are restrained, including dial-up connection or unstable and sluggish DSL, the satellite in this scenario is an obvious winner.

On top of the much needed high investment, it takes a couple of months to develop the fiber deployment and eventually make it accessible to such distinct locations.

In case, there is no access to any dependable terrestrial connectivity, satellite internet in comparison is the most cost-effective way of getting high-speed access to the internet.

Since the satellite network is composed of just a satellite, NOC, teleport, and VSAT terminal; the amount of average outages for such a network is drastically low.

An entire setup of a satellite network can function independently and manage connectivity until the equipment is stable, sound, and powerful. For more information about reliable and secure internet connection in your area, you should check the website.
Security

Satellite internet is usually viewed as secure and safe than any other mode of internet connectivity because blocking the transmission between the satellite and the dish is way too complex than hindering the signals from a physical cable.

How to Recover Permanently Deleted Emails on iPhone

How to check iPhone Temperature

Editorial Team - September 22, 2020
0
Does the USPS ship on Sunday? Yeah, USPS does ship on Sundays. But wait... just "Yes" is not the answer. The United States Postal Service better...