If you’re looking to get a brand new gaming PC less expensive at this moment to buy one that is pre-built then to build your own. here we are with Best 5 Gaming PC low price / TOP Gaming Desktops 2018 and 2019

As you may have heard crypto miners at because the prices of GPUs to nearly double in price making it very expensive to build your own. 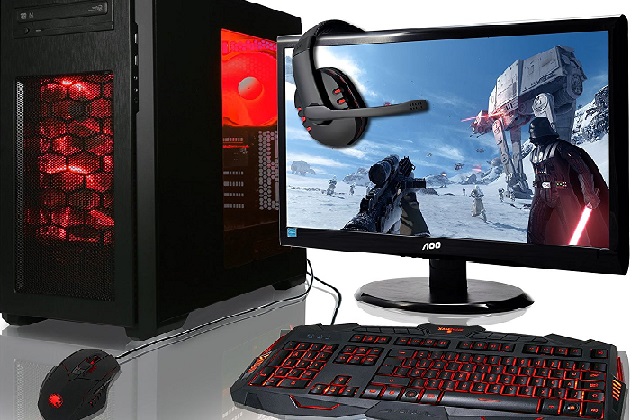 So today I’ll show you the top five best gaming desktops. based on the system and pricing to find you the best deals.

Gaming tower the specs are modest features an Intel quad-core i5-7400 processor 8 GB of ram and a 1 TB hard drive.

The graphics card is a dedicated NVidia GeForce GTX 1060 8 CD DVD described is included along with the 7 in 1 media card reader, a keyboard and mouse are also included.

It does come with pre-installed software which will probably want to uninstall if you get this computer.

Other than that the HP Pavilion Power 580 is a great deal right now with the price of 742 dollars depending on when you’re reading this article. Pricing may vary for all PC’s mentioned in this article.

It’s ready for use with your favorite headset with the 4 GB AMD Radeon Rx 580 graphics card with HDMI and Display Port for multiple monitor setups. Other ports include 5 USB 3 point 1and 2 USB 2 point 1.

The Wi-Fi that is built-in is 8 or 2.11 AC with better specs including a more powerful graphics card and considering it’s not much more than the HP pavilion mentioned earlier the cyber power PC with the retail price of around 780 is a much better value for the price.

You can even connect it with The world’s most powerful pocket-sized projector, to get an enhanced gaming experience on the big screen. Pique’s high quality and 200 lumens of projection power will make them the best gadget to enjoy power-packed game nights.

Lenovo may not be a brand that you think about much when it comes to gaming. but their IdeaCentre y900 gaming desktop. packs some serious specs for the hardcore gamer.

The processor is an Intel quad-core i7-6700. the memory sixteen gigabytes and storage include a 1 terabyte hard disk drive plus a 128 GB solid-state drive.

The front of the case lights up with red lighting and there’s plenty of room in the chassis for expansion.

Just like the cyber power PC, I mentioned earlier. iBuypower is becoming more well known for offering top-notch specs for fraction of the cost of its competitors.

This ultra-gaming PC features an Intel I7- 7700 quad-core processor and 16 gigabytes of ram with 4 slots for expansion.

it has built a 1 terabyte hard disk drive and a 240 GB solid-state drive the graphics card is 8 GB NVidia GeForce GTX 1070 with an HDMI DVI and Display Port.

this iBuypower ultra gaming PC is a great value for the retail price of around 1400 dollars.

If you really want to kick it up a notch the cyber PowerPC gamer Xtreme VR maybe what you’re looking for it features liquid cooling and overclock about Intel i7-870, and 16 GB of memory expandable to 64.

The Graphics card is an 11 GB NVidia GTX 1080 TI. which is one of the most powerful cards that NVidia makes.

The GTX ten eighty TI is selling for upwards of a thousand dollars or more that’s if you can find it in stock anywhere.

They’re selling out almost as quickly as retailers can get them into the stock.

This gaming PC in addition to having one of the best graphics cards also has 6 USB 3 point 1 and 2 USB 2 point oh ports a multimedia gaming mouse and keyboard are also included.

Considering how much it would cost just purchased the graphics card by itself for this PC this makes the cyber power PC gamer extreme DR one of the best values in this video with the retail price of 1999 dollars.

Hopefully, this helps those of you looking for a new gaming PC.

Editorial Team - November 21, 2019
0
It is proven that team communication is the backbone of most businesses. Without it, you'll observe a noticeable decline both in the productivity and...